As part of the school’s plan to promote literacy and to encourage our students to read more we would like to recommend the following books.
These titles have been compiled from suggestions given to us by students and cover a full range of interests.
We hope you find this list helpful if you are considering purchasing some books as part of a Christmas present or if you are looking for something new read.

Don’t forget that the library have a brilliant app called “BorrowBox”.
It is free to download on devices and offers instant access to their ebook and audio book facilities.
​​​

Looking for some books to buy or read over the holidays?

Here is a selection of titles and authors that are especially popular among the students.

This author is a firm favourite among the students. These are two very popular titles from him but he definitely has something to suit all tastes.

–  Family action and adventure also manages to include Finland and wolves.

“The Boy in the Striped Pyjamas” – John Boyne

“The Boy in the Dress” – David Walliams

“Fantastic Beasts and Where to Find Them “, “Harry Potter and the Cursed Child” – J. K. Rowling

“I am Zlatan: My Story On and Off the Field” – Davis Lagercrantz and Zlatan Ibrahimovic

On Wednesday afternoon – March 11th – the GP Room filled up with spectators and participants for the Grand Final of the 1st Year Spelling Bee 2015.

Each first year group had put forward their strongest representatives. On the day 13 brave men stood up to face the trickiest of words. Mr. Hegarty showed no mercy as round after round he fired spellings their way.

After a gruelling and tense 10 rounds last man standing was Cormac Sinnott. Huge congratulations to him, a very worthy winner of the Kindle Fire.

Well done to all. 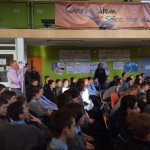 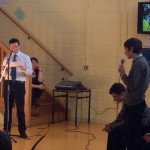 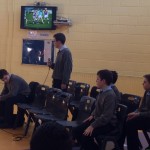 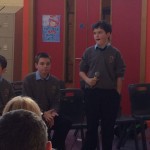 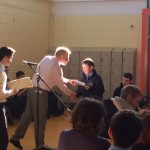 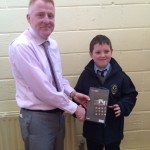 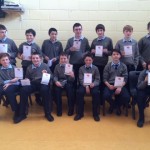 DEAR-DROP EVERYTHING AND READ SCHEDULE

25th May- Exam Week- No Drop and Read

Here is a list of recommended books and popular novels.

This year we are asking all students to bring a suitable novel of their choice in to school, everyday. Your son can read, discuss, even swap his favourite books as we seek to remind ourselves of the joy of reading. Every week we will set aside reading time for the entire school community ( yes , even the teachers!) to read what they want for a change. Maybe you could suggest a novel to your son that you have read, (who knows he might return the compliment! ). Reading is an invaluable, enjoyable gift that we can all share together and it’s never too late to start.